DB Schenker traces its foundation back 150 years to 1872 when Gottfried Schenker started Schenker & Co in Vienna, Austria and offered the first consolidated rail shipments from Paris to Vienna.

The 2022 version of the organisation’s metrics are mind boggling with 72,200 employees in 2,100 locations across 130 countries. DB Schenker is acknowledged in Europe as the number one in land transport with 100 million land transport shipments per year, which translates to one every three seconds.

There are 430 land transportation branches across Europe and DB Schenker is also a global leader in contract logistics with more than eight million square metres of warehouse space across 60 countries.

DB Schenker is focusing on participating in the green supply chains of the future and as an important step in its commitment to be net carbon neutral by 2040, DB Schenker has been an early adopter of Battery Electric Vehicle (BEV) technology and has already completed more than 1.5 million kilometres with electric powered vehicles in its European land transport network.

Since 2017 DB Schenker has been a pioneering customer of the Fuso eCanter and has continued to cooperate with the manufacturer in the development of practical zero emission commercial vehicles.

Feedback from DB Schenker has been taken into account during the development of the second generation eCanter, particularly, in relation to operating range limitations being affected by time spent in traffic, the topography of the area where the trucks are used, as well as battery drain caused by repeated operation of the tail gate lifters which are fitted to many.

The second-generation Fuso eCanter appears to have successfully addressed these concerns with its three modular batteries and eAxle technology providing additional range. The second-generation vehicles are now being confidently scheduled to perform shifts covering more than 100 kilometres.

DB Schenker is currently operating the largest fleet of Fuso eCanters in Europe and is scaling up its efforts significantly to shift its urban collect and delivery fleet completely over to electric vehicles by 2030.

This will require a major roll out of charging infrastructure throughout the various depots.

“The drivers are not getting nervous towards the end of their shift,” says Hendrik Nonnenmacher who is the manager of the DB Schenker branch in Frankfurt which has been the location for trials using Fuso eCanters.

Frankfurt city is a classic dense urban area where a 100-kilometre operating range between recharges is fine except for the risk of getting caught up in traffic on it many narrow streets.

DB Schenker is not immune from the shortage of skilled drivers. In recent times this challenge has increased as many male drivers were based in Ukraine and have left the transport industry to fight in the conflict with Russia.

Drivers capable of handling larger trucks that often tow trailers, are in particular low supply so there is a move towards lighter trucks in the 7.5-tonne and 12-tonne categories, which still leaves the challenge of providing operators for the larger combinations.

“It’s difficult to get drivers, especially good drivers and we have begun targeting entry level younger drivers using eMobility as a recruiting argument,” says Hendrik. “They like the concept of driving an eTruck, and even diesel drivers enjoy the eTrucks because they are much more quiet and comfortable.”

Incentives designed to attract and retain experienced drivers have gone as far as providing a company car in lieu of additional salary.

DB Schenker makes very good use of its innovative ‘swap bodies’ which are similar in dimension to 20-foot containers and can be left at a customer’s premises to be loaded or unloaded while the truck can move on to perform other operations.

No lifting equipment such as a crane or sideloader is required as the swap body is able to stand on its own fold down legs. 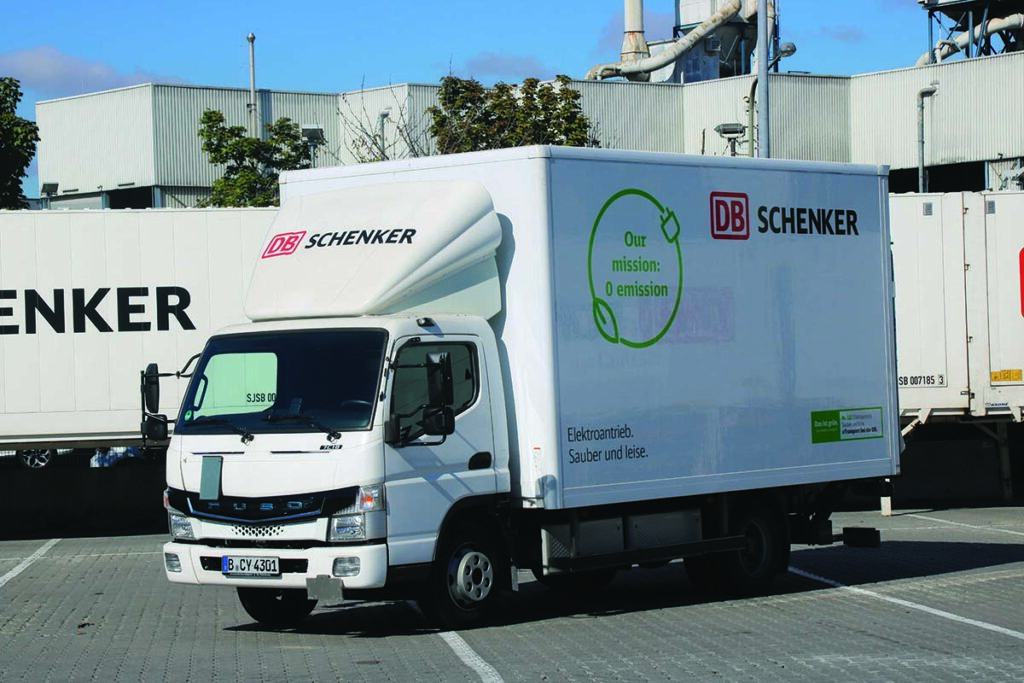 Lowering the truck’s airbag rear suspension drops the truck chassis away from the swap body so that the truck can drive clear and go on to the next pick up.

Re-attaching the swap body is a simple reversal of the procedure with the suspension set in the lowered position for the truck to slide back underneath the body, and then raise itself again using the suspension’s airbags.

The swap body is attached to the truck chassis using container lock devices. Recently joining the Frankfurt fleet are a number of Mercedes-Benz eActros 300 models which have, as their drive unit, a rigid rear eAxle with two integrated electric motors and two-speed transmission.

The eAxle driveline can provide a continuous output of 330 kW and a peak output of 400 kW. DB Schenker will soon be adding some prime mover versions of the eActros which were on display at the IAA Transportation show in Hanover.

Practical zero emission electric vehicles are a key element in DB Schenker’s enthusiastic pursuit of sustainability and its commitment to be free of fossil fuels by 2040.

The organisation already has more than 170 eVans, eTrucks and cargo eBikes similar to those being used by Australia Post.

Being a good corporate citizen extends beyond environmental pursuits and DB Schenker has within its social and governance policies a target of a 50 per cent female workforce globally by 2030.

An additional 1,500 electric vehicles of various categories are currently on order, demonstrating not only DB Schenker’s serious commitment but also the recent and rapid level of maturity reached by electric vehicles as practical alternatives to those powered by traditional internal combustion engines.

“We are making advanced investments in green supply chains despite high costs to protect our climate. Our appeal is to customers: The offer is there, now the demand and willingness to pay for clean transport must also pick up.”